THE ONLY WOMAN IN THE ROOM, by Marie Benedict 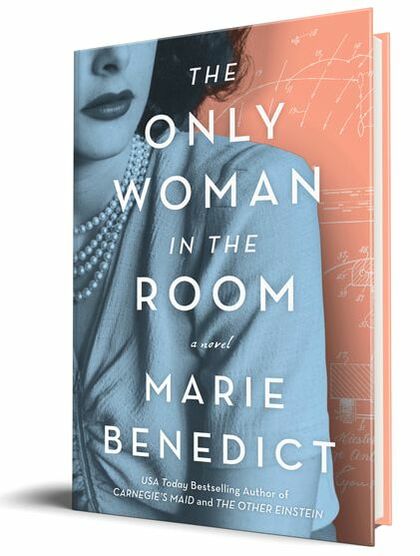 The Austrian-born actress known to history as Hedy Lamarr was both blessed and cursed to be stunningly beautiful. Vienna born, she was destined to be noticed only for that and not for her mind. All her life, she coped with the limitations society placed on women, no matter their stations. Born Hedwig Kiesler, she was adored by her father, a banker, and treated coldly by her concert pianist mother. who feared Hedwig would be spoiled. Although Jewish, they were not observant, and at one point their Jewishness was officially "erased".
At nineteen, as she was starring in a play in Vienna, she attracted the attention of the richest man in Austria, Fritz Mandl. Hedy's family knew he would not take no for an answer and, for a while, she was mesmerized by him. Marriage to this powerful, imperious man was outwardly privileged,  but inwardly shortly became a prison. Mandl made every single decision, from her attire to the table settings to the guest list. She was merely a pretty face at one end of the dining table, powerless, and knowing the price she could pay for dissent. When Hedwig overhears her husband kowtowing to Hitler, she flees the gilded cage. Meeting L.B. Mayer in London, by the time Hedwig Mandl arrives in America, she is Hedy Lamarr.
And the rest is - almost - history. But the most interesting and terrible part is yet to come: Worl War II and America's part in it. I'm no believer in spoilers, so we'll stop there. This author has a way of getting udner the skin of her women, and the results are compelling as well as entertaining (and, many times given the social mores of the day, infuriating and heart-breaking).
A previous bio by this author of Albert Einstein's wife, The Other Einstein, brought to life another woman underestimated and marginalized.
Austria Hedy Lamarr Hitler Hollywood Holocaust Jews in Europe Louis B. Mayer Marie Benedict Nazis women's history womens history

THE SECRET DIARIES OF MISS MIRANDA CHEEVER, by Julia Quinn

1/series. This delightful novel begins the Bevelstoke series. Remember when you were ten years old and felt like the ugliest duckling in the world? Meet Miranda Cheever, without a doubt one of us. This Regency-era misfit grows up knowing she will never make a match, and that men do not find her attractive. When handsome, dashing Nigel Bevelstoke kisses her hand and promises that one day she will grow into herself, she falls irrevocably in love. Heady stuff for a ten year old. Nigel then swans off into his adult world and complete disaster. Click below for more...

A Harry Hole suspense #12. Set in Oslo, starring brilliant but damaged detective Harry Hole, this book shouldn't be read without delving into prior works in this series. In fact, you should read #1 through #11 before you start this one. You're in for a wild ride following chain-smoking alcoholic Harry as he battles personal demons, the Oslo Police hierarchy, internal betrayals and intrigues, and a disastrous love life involving a myriad of fascinating women. Harry, despite his many obvious problems, is a major babe magnet. Oh, golly, I almost forgot the murders, all of them grisly and challenging, all solved by Harry and his almost-infallible gut, after hair-raising chases, searches, confrontations, and near-death moments.  Every writer owes their story the truth. Being nice to characters, sparing them grief or upset, simply isn't possible. This is the darkest moments of Harry's tumultuous life, and because I never do spoilers, there's not a lot I can tell you abo

THE MASQUE OF THE BLACK TULIP, by Lauren Willig

2/ Pink Carnation series. Delightful derring-do with romance in Napoleonic-era France and England, discovered as modern-day historian Eloise Kelly researches old documents in a stately home, with the reluctant permission of owner, handsome but uncooperative Colin Selwick. On the historical side, as Eloise finds, the Black Tulip is a ruthless French spy sent to assassinate a pesky and highly successful English spy known as the Pink Carnation. Click below for more review...

Rumors say Lord Adam Dunsbourne is a degenerate, a gambler who ruined his family, an evil brother who has imprisoned his sister in the crumbling family mansion. Phoebe Hadford hears the whispers when the handsome baron and his sister make a surprise entrance into a dinner party. Adam has, since his father’s death five years earlier, has single-mindedly labored to restore the family’s fortunes plus track down the wily swindler his father naively trusted. Belatedly, he had realized he's neglected his sister. Newcomer Phoebe might be the ton’s ideal of a lovely young woman, but she has an unfortunate independent streak her mother simply cannot train out of her. She quickly finds that all the gossip isn’t accurate. For his part, Adam is sure the beautiful blonde is a featherheaded female who only cares for fashion. Phoebe and Emily quickly become friends, leading Adam to find out for himself how kind and thoughtful their neighbor is. As their regard for each other deepens, Adam s