A PLAGUEOF ZOMBIES, by Diana Gabaldon 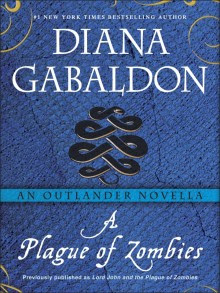 A wonderful read-it-in-one-evening novella starring Lord John Grey, who now stars from time to time (not often enough for me) in his own series rather than as a brilliant supporting character in the famed Outlander series.
Jamaica, then part of the British Empire, is a beauiful mountainous island blessed with beaches, harbors, rivers and waterfalls, and cursed with the vicious world of slavery. In Jamaica, it's  largely sugarcane plantations. As with most plantations anywhere in the slave-owning world, the enslaved outnumber the owners by a huge number. Revolt and rebellion simmer constantly, and the means employed to keep the slaves subdued are horrific.
Lord John is in Jamaica on the King's business but is at once drawn in to the sinister world of voodoo and zombies when the local Crown representative is murdered in a ghadtly scene. The author could've slid into zombieland, and does for a few moments, but the supremely practical Lord John at once begins to sort out the strands of at least two mysteries.
As always, the author is amusing, bloody-minded, and utterly merciless.
A wonderful read, perfect for a winter evening. It's a four.

For a debut novel - heck, for any novel - this is spectacular. Set flawlessly in Qing dynasty China (1708), exiled Imperial librarian Li Du comes to Dayan on the Tibetan border asking permission to pass through. His distant cousin, a pompous magistrate who is run by his secretary and his official hostess, oversees the province, long known to the ruling Manchus as a trouble spot. The Emperor will visit in six days to display his Son of Heaven moniker by predicting an eclipse of the sun. Guests arrive with spectacular gifts, among them a representative of Britain's East India Company, greedy for China's trade. Li Du meets a Jesuit priest, Father Pieter, an astronomer, one of the order of priests long influential in the country. Click below for more, but never a spoiler...

5/series starring LA burglar-for-life Junior Bender. Sent to burgle the home of a notorious hit man called The Slugger, Junior's promised window of opportunity is abruptly closed just as he lays fingers on the prize. It's a set-up. Bender, with typical chutzpah and a spectacular save by his girlfriend, escapes, but The Slugger and a like-minded sidekick are hot and heavy on his trail. Along with the chase, his ex-wife texts a change in his daughter's birthday party plans. Yet another set-up that could turn lethal! Click below for more no-spoiler review.. .

THE OTHER SIDE OF MIDNIGHT, by Simone St. James

London, 1925, where talented occult mistress Ellie Winter is left a note by her arch-rival Gloria Sutton, who has been murdered at one of Gloria's own seances. Reluctant to enter Sutton's high-visibility world, Ellie decides to honor her adversary's request to "find me", only to find herself dogged by handsome and relentless war veteran James Hawley, who despises charlatans and fakes, and lives to expose them. But Ellie is the real thing, and had given up contacting the dead after the brutal war which wiped out nearly a generation of English men, and now she will only find lost objects. Click below for more...

Book seven in series. Further adventures of John Corey, feisty former New York City detective and now part of a task force monitoring the activities of the Russian espionage agents working in New York. Corey, whose short fuse is legendary as well as the despair of his FBI wife, tracks members of the Russian delegation to the U. N., among them one deadly agent of the KGB. Russian colonel Vasily Petrov of the Russian Foreign Intelligence Service goes to a weekend party at the eastern end of Long Island, playground of the rich and devious. Corey, of course, violates protocol and masquerades as a caterer to follow the Russian into a wealthy oligarch's stronghold. When Petrov and a dozen beautiful escorts walk down tthe beach and disappear from view at the height of the party. alarms go off in Corey's head but nobody else is disturbed.  Rejecting the conservative approach of asking his superiors for direction, Corey and a reluctant counterpart with mysterious connections follo

The old nickname for London - The Smoke - no doubt had to do with the smog from thousands of coal fires that once made the city's air nearly unbreathable and created impenetrable fogs. In this novel, set in (probably) the early 20th century, Smoke alludes to a visible evidence of sin, in thought or deed. Hundreds of years before, this strange manifestation changed British history, and over time isolated the island from the world's progress. We open at an elite boy's school where the children of the "smokeless" class send their sons. Click below for more...